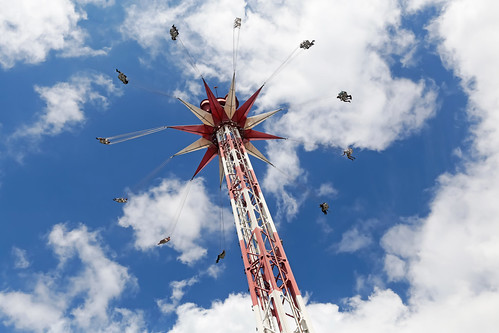 Lighthouse Tower 25/06/2018 12h10
In the section called The Beach are some nice attractions like a jetski attraction, a boat tour and this so-called Star Flyer.
The Star Flyer is a ride of a special type of chain carousel of the Austrian manufacturer Funtime. Other manufacturers have copied the idea and build similar rides.
It consists of a structure to which the gondolas are attached. This has a drive and sets the gondolas in rotation. At the same time, the suspension structure is pulled up on a freestanding steel truss tower. At the highest point, the Starflyer usually slows down before the rotating suspension structure is lowered back to the ground. The journey takes about four minutes. Starflyers exist in both stationary and portable versions.
Year of opening: 2006
[ Wikipedia ]

Holiday Park
Holiday Park is an amusement park in Haßloch, Germany. It is one of Germany’s most popular theme parks (receiving about a million visitors per year) and is part park and part woodland. Its Free Fall Tower was the first amusement ride of its kind in Europe. The Park also offers several roller coasters, including Expedition GeForce, water rides, and live shows.
In 1971 the Schneider family bought the Märchenwald Haßloch. The park was renamed Holiday Park in 1973 and changed to "Holiday Park Plopsa" in 2012, after takeover by the Plopsa group. Initially, the surface area of the park covered 70,000 m², but today the surface area has grown to 400,000 m².
In November 2010, Holiday Park and Plopsa announced that Holiday Park had been purchased by Studio 100 as a new extension of the theme park chain.
Expedition GeForce has been consistently remained in the top ten of the "Golden Ticket Awards: Top Steel Roller Coasters" as well as the top three in the "Mitch Hawker’s Best Roller Coaster Poll: Best Steel-Tracked Roller Coaster" since opening in 2001.